His lineage can be traced back to the ancient Medinite tribe known as the ‘Ansar’ who lent their support to the Prophet Muhammad and welcomed him to take up residence in their city after the people of Mecca had persecuted him and driven him out. His most immediate descendants can be traced back to Islamic Spain (Andalusia). But they would later take up residence in the ancient Moroccan city of Fez 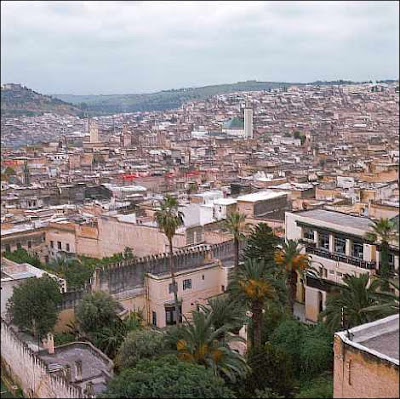 where Sidi Ibn ‘Ashir grew up and spent most of his life.

He was known as one who excelled at the various Islamic disciplines. He was also an extremely righteous and ascetic person. He, like many scholars before him, provided for his self through his independent labor and exertion. He was well-known for always seeking out the most wholesome and purest of food (halal). And people knew him to be humble, modest, and of the most outstanding character.

He would even sometimes attend the circles of scholars who were lesser than he in knowledge in order to take benefit. And he was constantly involved in teaching. When he spoke to and about people, he was very fair in whatever he had to say to others.

Some of his greatest contributions are in the area of the variant Koranic readings (qira’at). He has super-commentaries on the works of major scholars of that discipline, like Imam Ja’buri. He also surpassed those of his time in the area of scriptwriting (rasm). And he has an amazing commentary on a work entitled ‘Maurid Al-Zham’an’ (Drinking-Pool of the Thirsty) that deals with the manner of writing the script of six of the seven major authors of the variant Koranic readings besides Imam Nafi’i [1] that consists of approximately 50 lines of poetry.

He performed the Hajj pilgrimage in the year 1008 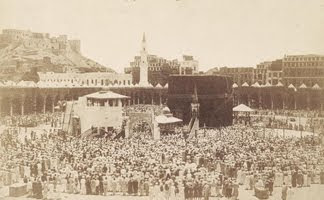 when he was 18. And he participated in a number of military campaigns. It was a common practice for him to take retreat in the mosque (‘itikaf) and stand up for the night prayer (tahajjud) very often.

His student, Shaykh Mayyara says of him in ‘Mu’in Al-Qari’ (The Aid of the Reciter) and in his Kabir on Al-Murshid Al-Mu’in:

“And there is no doubt that he eclipsed his own teachers (ashyakhahu) in versatility (tafannun) in the areas of presenting the various scholarly arguments and determining those that were correct (tawjīhāt and ta’dīlāt).”

In a work entitled ‘Al-Matmah’ (The Goal), the author mentions:

“When he made Hajj and met with Shaykh ‘Abd Allah Al-Danushari and was asked by the Shaykh about his teachers (ashyaakihi) among which he mentioned ‘Al-Qassar’, Al-Danushari composed the following poem:

And adorned with it virtue to those who were nude

Its selvages excite wonder and its embroidery is soft

But it is still in need of Al-Qassar”

And he (Ibn ‘Ashir) learned the spiritual path of Tasawwuf from his shaykh, Sidi Muhammad Al-Tajibi, better known as Ibn ‘Aziz, who is buried in Al-Darb Al-Tawil. He also reported marvels from him that he used to relate to others. And it was by his hand that the expansiveness of knowledge and good works were made easy for him (futiha ‘alaihi).

He – may Allah show him mercy – also composed a number of works characterized by the greatest of style and accuracy. One of them is the famous didactic poem that deals with the Five Pillars of Islam and the Fundamentals of Sufism entitled ‘Al-Murshid al-Mu’in ‘ala Al-Daruri min ‘Ulum Al-Din.’ He started to compose it after he adorned himself in the pilgrim garb for Hajj. Then he composed the acts of Hajj in their sequence as mentioned in his work starting with the words:

So once he completed his Hajj, he finished (writing) what relates to the Five Pillars.

Another one of his works is his ‘Marginal Notes’ (Turar) that he recorded on Imam Al-Tatai’s small commentary on the Mukhtasar of Shaykh Khalil entitled ‘Jawahir al-Durar ‘ala Mukhtasar Khalil’ (The Jewels of the Pearls of the Mukhtasar of Khalil). Shaykh Mayyara says in his commentary on his didactic poem composed on ‘Takmil Al-Manhaj’ (Perfecting the Path):

“And they are excellent marginal notes. Some of them pertain to the comments of the aforementioned commentator and others pertain to the comments of Khalil. He solved in them a number of problematic issues and removed by them a number of obscure matters. So may Allah reward him from the Muslims good and magnify his reward for that…” And he said: “The Most Erudite Pious Saint Abu ‘Abd Allah Sidi Muhammad ibn Abu Bakr – may Allah have mercy on him, give benefit by him and eternalize the good and blessing among his progeny – gave an order to circulate those marginal notes. So I brought out more than 20 handwritten pamphlets (kurras) from the large closet (qalab). The people benefited from them. And they were published in the different towns.”

And in ‘Mu’in Al-Qari’ he mentioned that he brought out approximately 40 handwritten pamphlets.

And anytime a relative of his died, he didn’t prepare a banquet for those who would gather to recite Koran for the dead (hazzabun) as was the custom of people in his town. As a result, he was accused of being miserly. So when his brother died and he attended his funeral, he stood up once the people began to leave and said:

“O ye people! The only thing that kept me from preparing a banquet for the hazzabun is that they corrupt the recitation (of the Koran).”

But him saying that didn’t make the hazzabun stop this practice nor did the people stop preparing banquets for them.

He even used to say:

“The recitation of the hazzabun is an excuse for one not to attend funerals.”

That was conveyed about him in Badhl Al-Manāsaha (Offering Sincere Advice).

As for his death, he – may Allah show him mercy – was afflicted with an illness that the common folk called ‘Al-Nuqta’ (The Dot) on the early morn of Thursday, the third day of the Sacred month, Dhu al-Hijja, in the year 1040 AH. He died close to sunset on that day at the age of 50 – as is found in the handwriting of Sidi Al-Mahdi Al-Fasi. And he was buried the following day at the top of Matrah al-Janna near the prayer room (musalla). And a bow was built over it.

The author of Al-Nabiyya writes:

“And his bow located in the western portion of the Rawda of Sidi Yusuf Al-Fasi is well-known.”

His grave faces the direction of the Rawda of Sidi Yusuf. May Allah eternalize the benefit taken from him during life and after death.

[1] His name was Nafi’ ibn ‘Abd Al-Rahman ibn Abu Na’im, the client of Ja’una ibn Shu’ub Al-Laythi, who was the patron ally of the Prophet’s paternal uncle, Hamza ibn ‘Abd Al-Muttalib. He was originally from the town of Asfahan. And he died in Medina in the year 169 AH. He is considered the Imam of one of the 7 most famous Qur’anic modes of recitation, which would be recognized as the ‘Qur’anic Style/ or Reading of Medina.’ [Al-Jazari, Muhammad ibn Muhammad ibn ‘Ali ibn Yusuf: Tahbir al-Taysir fi Qira’at al-Aimma al-‘Ashara. Dar al-Kutub al-‘Ilmiyya, Beirut, Lebanon 1404AH/1983CE, pp. 13-14]
Posted by AbuIsa at 1:06 PM